acknowledged as the original source. Please contact the webmaster for permissions to use any content at webmaster@londonwolves.com All materials/designs on the website are © WWLSC 2003-2020. “London Wolves® is a registered Trade Mark.. London Wolves Ltd is registered in England No: 05329824 Registered Office: 100 Fairthorn Road London SE7 7 FW

Details and Pictures below

This year the walk takes us past a "Wetland Centre" - the best urban wildlife site in Europe, according to its website - and a number of historic houses and pubs, one of which is haunted, although, not to my knowledge, by anyone from a previous London Wolves walk! Apart from the numerous pub stops planned there is an opportunity to visit a number of attractions nearby including the Wetland Centre (there is a charge to enter this), Chiswick House (entrance fee) and gardens (free entry) and Hogarth's House (free entry). For those who prefer not to take a leisurely stroll in the sunshine an alternative option by bus is available. 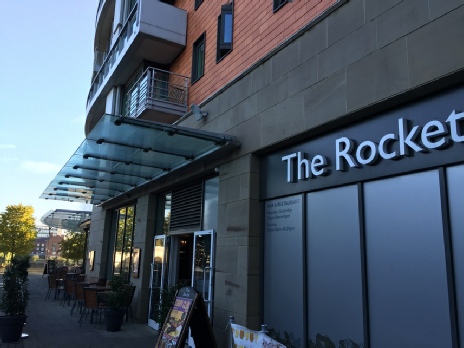 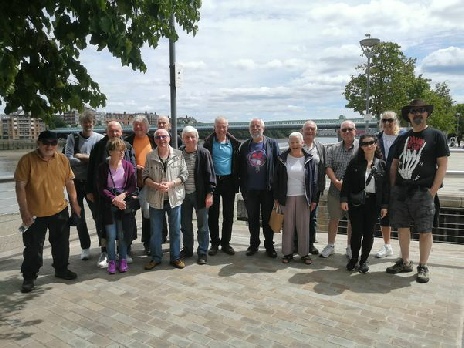 On a sunny July day, eighteen hardy souls gathered in anticipation of the first London Wolves “summer walk” since the famous “Naked Ladies” venture of 2019. After a pint and breakfast in the Wetherspoons “Rocket”, on the south bank of the River Thames at Putney, the group were ready for “take off”! 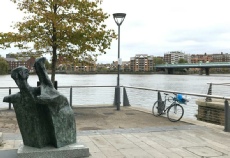 point of interest was one of 9 abstract art sculptures by Alan Thornhill, the creator of the “Putney Sculpture Trail”, which is the largest permanent installation of public art by one artist in London. The trail opened in September 2008 and stretches for one and a half miles on the south side of the Thames either side of Putney Bridge, which is famous in its own right for being the start of the Oxford and Cambridge boat race since 1829. The first sculpture on our walk - “Punch and Judy” - 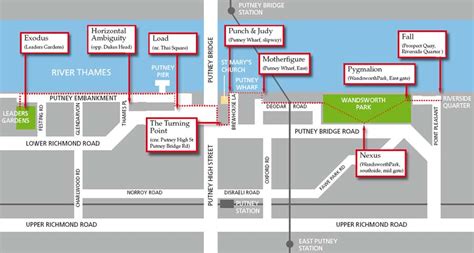 happened to be directly outside the pub, followed quickly by the second - “The Turning Point” - on the corner of Putney High Street and Putney Bridge Road. A third - “Load” - was passed at Thai Square, shortly before the group reached “The Bricklayers Arms” which is one of the London Wolves favourite London pubs, noted for its friendly service and good range of beers and often frequented by members before Chelsea and Fulham away matches. It was here that we were joined by the Chairman, Deputy Chairman and the editor of the London Wolves magazine.       After a pint or two the majority of the group embarked on the “Wetland” part 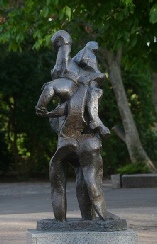 rizontal Ambiguity” ( opposite the “Duke's Head” and probably more apt as a description for a few members of the group at the end of the day rather than the beginning!) - and “Exodus” in Leanders Garden, were passed. Next came the impressive new stand at Fulham F.C. on the opposite side of the river. After three quarters of a mile we reached the entrance to the London Wetland Centre. Opened in 2000, the centre is one of the best urban wildlife sites in Europe, providing “an oasis for wildlife and a place of tranquillity for people in the heart of London's  suburbs”, according to its website. However, on this occasion all of the group were content to continue the walk rather than pay the entrance fee! 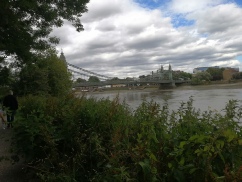 Eventually, after about 50 minutes of casual walking from Putney, the group reached Hammersmith Bridge.Designed by architect Joseph Bazalgette, who is probably more famous for the creation of a sewerage system for central London, the bridge was opened on 11th June 1887 and is one of the World's oldest mechanical suspension bridges.However, time has taken its toll as microfractures, caused by corrosion and heatwaves, were found in its cast iron structure and it was closed in August 2020. Fortunately, it was reopened for pedestrians and cyclists in July 2021 and so we were able to cross to the north side of the bridge in order to sample the delights of the “Blue Anchor” and “Rutland Arms”. 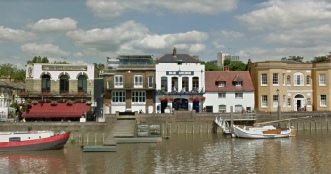 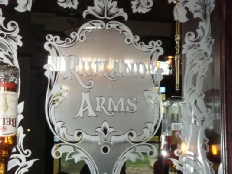 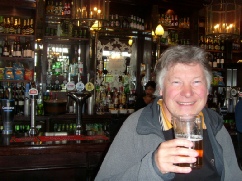 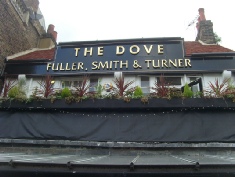 Next came one of the highlights of the walk, the famous “Dove” pub which has been a Fuller's house since 1796 and served many famous people including J.M.W.Turner, H.G.Wells, Earnest Hemingway and Graham Greene over the years. James Thomson is said to have written the words to “Rule Britannia” in an upstairs room of the pub and Charles the Second and Nell Gwynne once dined in the building. Today, it is believed to contain the smallest bar in the World where you can purchase an excellent pint of Fullers E.S.B! 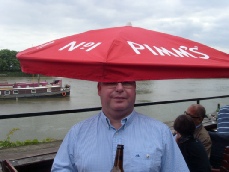 Beyond the “Dove”, the merry Wolves walkers passed the Headquarters of The William Morris Society where the artist and designer spent 18 years of his life. Eventually we reached the “Black Lion”, a haunted pub built on the site of a piggery where the pig farmers beer was so popular he decided to dispense of the pigs and build a pub! The “Black Lion” is the scene of an inquest into a murder committed by Francis Smith who, after consuming a few beers, decided to put an end to the “Hammersmith Ghost”, a spirit that had been troubling the area since 1804. However, instead of shooting the ghost, Smith had mistakenly shot Thomas Millwood, a 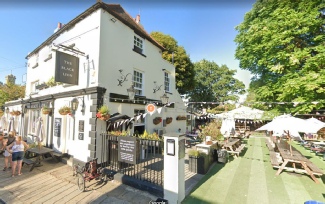 local plasterer who had been dressed in white! Bar staff have been said to have heard footsteps pacing up and down on the upper floors of the building. The ghost of a young girl has also been seen in the “long room” which houses the pub's World famous skittle alley. Only “fearing” to venture into the pub to buy a beer, we spent some time drinking in the large pub garden!

Having exited the pub without seeing either of its two ghosts, the group continued up Hammersmith Terrace where there are three “blue plaques” commemorating the lives of its famous residents. The first, at number 3, is dedicated to Edward Johnson (1872 - 1944), the father of modern calligraphy, who designed the original London Transport typeface and roundel system which has since been updated in the 1980’s. Sir Emery Walker (1851 - 1933) engraver, photographer and printer, lived at number 7 and A.E. Herbert, the poet and M.P. lived at number 12. 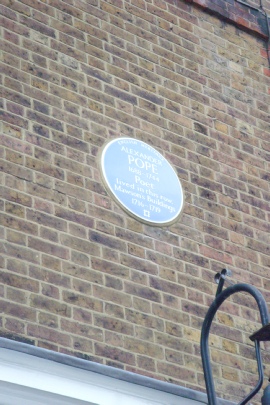 The official final stop on the walk was the Fuller’s Brewery shop which now serves a range of draught beers since the closure of the “Mawson Arms” next door. The poet Alexander Pope (1688-1744), who has featured in a number of previous London Wolves walks, lived in the Mawson building from 1716 to 1719.

Leaving Hogarth House and Chiswick House for another day, the wandering London Wolves caught the 190 bus to Hammersmith where we visited “The William Morris” (Wetherspoons) in order to reflect on our “wetland walk” and the team's prospects for the season ahead, amongst other things!