From The Sir John Oldfield via Falstaff’s tavern, St Bartholomew’s , the only statue of Henry VIII, A Red Cow, Bike Shop, Shakespeare’s House a Roman Wall and on to Paternoster Square thanks to Golden Boy’s Geoff’s Castronomic Tour. 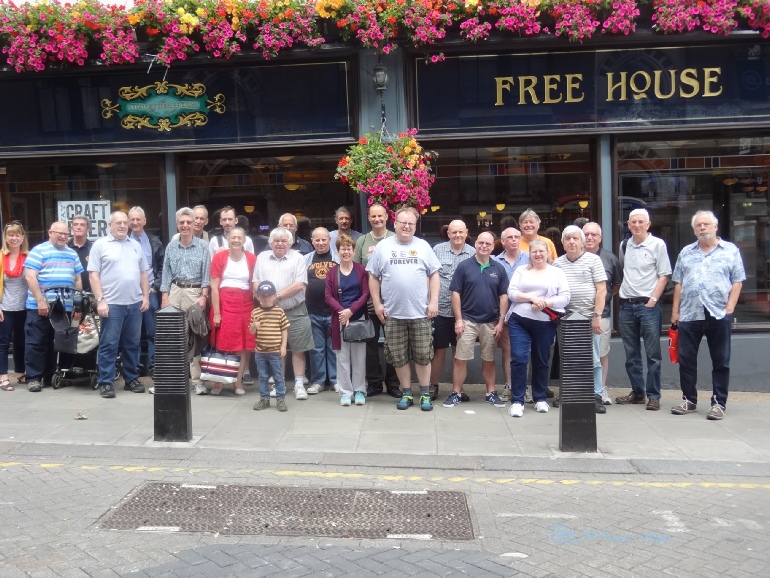 Breakfast at the Sir John Oldcastle,  and joined by Football Aid 60 match veteran Mark Feehan and family for a coffee breakfast before rushing off to “we will rock you.”   Early birds  Simon and Nutter Paul are already tucking in.

Not far from the Castle but we start by missing a pub - heading off to the Viaduct at Holborn but a sharp left  takes us to the famous Smithfield Market opened in 1888.

Geoff gave us a long explanation about the meaning of Cock Lane - which turns out not to be a Cock’n’Bully story as In the mediaeval period, it was known as Cokkes Lane and was the site of legal brothels. It is famous as the site of the house (No. 25) where the supposed Cock Lane ghost manifested itself in 1762,[1] and as being the place where the writer John Bunyan, who wrote England's first best-seller, died from a fever in 1688.

At the junction with Giltspur Street we reached the extremity of the Great Fire of 1666.   Known as Pye Corner the statue of The Golden Boy .  “This Boy is in Memmory Put up for the late FIRE of LONDON Occasion’d by the Sin of Gluttony 1666”  The statue was originally on the front of the “Fortune of War” pub, but can we blame Geoff for passing it by?

Next - St Bart’s Built in 1123 AD  - originally an Augustinian Priory with a long tradition of brewing.  The gatehouse is also a rare survivor of the Tudor City.

West Smithfield Rotunda Garden is peaceful enough now.  Geoff pointed out where an actor had jumped off the building (in a film) but worse was to come as, on the South East corner is  The Elms, earliest site for executions in The City .  Just before that, though, is the only surviving statue of King Henry VIII in The City.   Amongst the victims at The Elms was the Scot Wallace.

A few steps more and one of the rare surviving Tudor buildings = St Bartholomew’s Gateway, leading to the church bulit in 1123 AD. Originally a Priory, beer was brewed on the site from the earliest days. - Now celebrated with the gastro-pub St Bart’s Brewery.  But, just to confound his audience, Geoff insisted on ignoring  this and three other pubs - The Bishop’s Finger, The Butcher’s Hook & Cleaver and Fuller’s Ale & Pie House.

Don’t worry says Geoff, we’ll go through the church into Cloth Fair.  Up an alleyway to Cloth Court, there is a blue plaque to Betjeman in Cloth Court, while Cloth Fair is the site of the oldest house in the City.

Well, out of the churchyard and another pub - to walk past!   The Rising Sun.  Just to make it worse we walked left to see where Betjeman liver, looked at the Oldest House in the City of London, and then walked back past the Rising Sun again.

But we had every confidence that the rising thirsts would soon be slaked.   Next came the famous Hand and Shears which was …. Closed.  Worth a mention though that this was (when open!) where crowds would stop off for refreshments before going to watch hangings at Tyburn Tree.

Fortunately, we only had to turn round 180 degrees to see the Old Red Cow - no offence to Rob’s wife Jenny, who was wearing red!   Here we found local LW member Peter, wife Caroline, Charlie - who has been on the walk every year since being a baby, and Charlie’s new sister.

Although a small pub physically - a one up one down, we were made to feel welcome with a marvellous selection of ales.  And indeed, thirsts were temporarily slaked - before the next move

No one fancied a haircut at The Wacky Barber Co who claim to be the official barbers of the England team. - Just along from the Sun.   Along to the end of Long Lane  - turn left and left again and we are at Charterhouse Square.  The Charterhouse is a former Carthusian monastery in London, to the north of what is now Charterhouse Square. Since the dissolution of the monasteries in the 16th century the house has served as private mansion, a boys’ school and an almshouse, which it remains to this day. The residents of the almshouse are known as ‘Brothers’. This is a purely traditional term for those living in this community and acknowledges the past when there was a monastery on the site. The building is formally known as Sutton’s Hospital in Charterhouse- Charterhouse School  in Godalming was  the result of moving the school in 1872 under the Public Schools Act

After the earlier drought soon we were back to draught ales at the famous (opens 5:30am to serve Smithfield) Fox & Anchor to find Peter and Caroline who had taken a shortcut, although Charlie also seemed thirsty.

Then it’s on to the Clerkenwell Road and heading East.  Oops, another pub, The Sutton Arms passed.  We did visit one pub which had the football on but it didn’t have pump beer.  Feels like we’ve walked  to Aldgate   Might have been easier to go by bike.  Which is probably why Geoff stopped at a bike shop/cafe which also had some unusual beer (at £6 / pint).  So we pushed on to Old Street when a Wetherspoons hove into sight.   And the Poland match was on  at the Masque Haunt while the beer drinkers went to the William Blake next door.   Donner und Blitzen - we were forced to stay in the pub while the storm passed over, and then we could retrace our steps  back to the safety of EC2 from the wilds of EC1. So, let’s walk past some more pubs (Brighton contingent stopped) and we headed to the cultural oasis of the Barbican Theatre

- well we cut through the foyer and into the Barbican to look at Roman Walls, the location of Shakespeare’s house, London Wall, a flying pizza house, and the location of several of my customers from the 70s.   Wood Street nick seems to be flying the Croatian flag (but Col Police have always had red chequers) A quick look at Shakespeare’s statue - celebrating two local actors who were friends of Shakepeare and a stroll past the Guildhall, and Wren’s church.  No-one seems to remember Jonathan Routh’s Kee-ap-si-dee sketch  where he asked for directions to Cheapside.   At last though and awful revelation as Dave poses with Bow Church - he wasn’t born within the sound of Bow Bells so isn’t really a cockney!

A quickening pace as the rain starts up again - cross towards St Paul’s Cathedral and into The Paternoster.   Geoff’s Wolves t-shirt  attracted the attention of Charlotte behind the bar who , it turned  out, remembered the London Wolves taxi trips from Harpenden to Luton Town - arranged by Harley Bill and  her father.   Hopefully she will able to bring her father to the 50th Anniversary Dinner on 16th July. 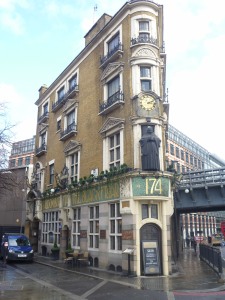 of us retired at this point - as St Paul’s struck 7:15 while Geoff was  threatening more Shakespeare and at least 6 more pubs……!!!   Well they kept going to visit a Black Friar at Blackfriars. Another brilliant Castronomic tour.